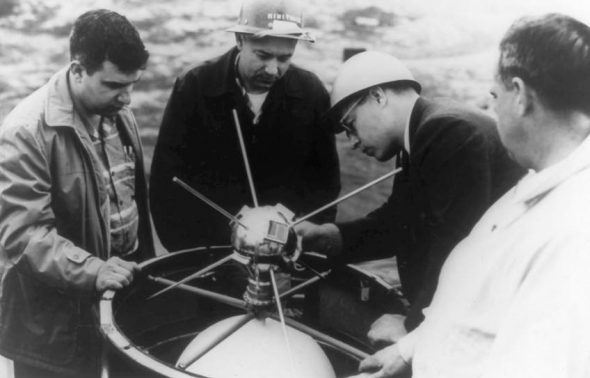 This month is an interesting anniversary: the sixtieth anniversary of solar power in space. On 17 March 1958, the American satellite Vanguard 1 entered orbit, becoming the fourth satellite ever to do so, and the first to use solar power. Vanguard 1 was small enough to be held in one hand — 1.5 kg (3 lbs) in mass and 16 cm (6”) in diameter, with antenna aerials 76 cm (30”) across. Altogether, Vanguard 1 had 6 silicon solar cells which generated about 1 wattin total. For comparison, the power produced by a typical rooftop solar PV system in 2018 is several thousand times greater, and global solar power capacity is hundreds of billions times greater.

These radio signals could be detected on Earth, even by amateur radio users. They provided additional proof that the satellite really was in orbit around the earth(it could also be seen with large telescopes), also allowed observers to measure its position and trajectory. The  power to provide this radio signal came from batteries, which lasted for 21 days before they went flat.